Kenya’s political climate has been tense as the country prepares for the 2022 general elections. Following the recent nominations exercise by political parties , cases of election-related violence were witnessed. To avert such, peace initiatives have been launched around the country by different peace stakeholders to ensure that the violence experienced in 2007 does not re-occur.

In this regard, on the 9th and 10th of June, Midrift Hurinet, in collaboration with International Alert and the Peace Actors Forum (PAF), organized local peace dialogue forums in Nakuru County. The forums dubbed “promoting peaceful and secure 2022 Elections” aimed to create a conducive platform for communities to dialogue on peace and security issues during the electioneering period to highlight early warning signs of election violence in the county’s hotspot areas. The forum, which targeted the sub-county Security Intelligence Committee (SCSIC), the National Police Service (NPS), community members (men, women, PWDs, and youth), Civil Society Organizations (CSOs), and local policing committees, also aimed to strengthen partnership and collaboration between security agencies and peace actors in the community as stakeholders. 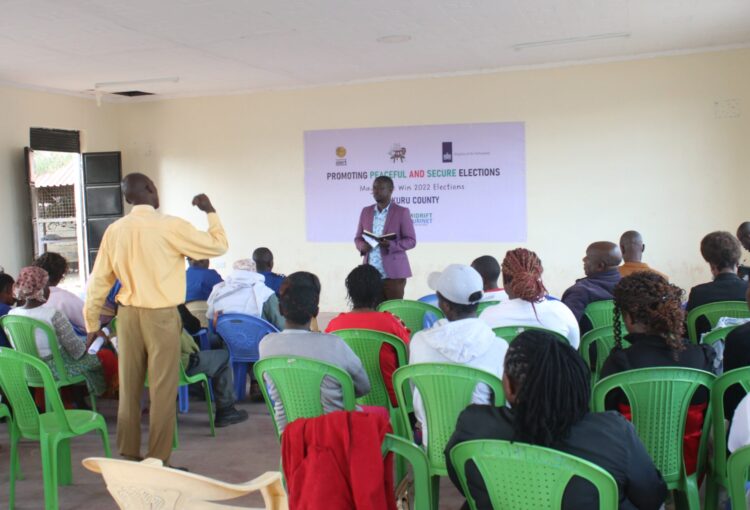 Derrick Chestit, program officer of the Resilience Peace and Stability Program in Midrift facilitating the peaceful and secure elections forum in Karagita, Naivasha sub-county. During the forum, the residents presented the early warning signs of election violence & possible solutions in the informal settlement

This comes as the National Cohesion and Integration Commission (NCIC) released the Conflict Hotspot Mapping Report 2022, which ranked Nakuru County as the second most likely county to experience election-related conflict out of 33 counties. The presence and large number of criminal gangs in the county (the majority of which are reactivated and become lethal during electioneering season), as well as increased political mobilization that tends to take an ethnic angle, have threatened peace in the region, resulting in its return to the list.

As a result, the intervention identified three high-risk Nakuru sub-counties as intervention areas for peace dialogue forums ahead of the general elections as Naivasha, Rongai, and Molo. Early warning signs of election violence in the sub-counties were identified as youth unemployment, political incitements, high levels of political intolerance, and hate speech propagated by political leaders and candidates who have been seen making allegations against other politicians, dividing the community along tribal lines, and also using social media to spread propaganda and intimidation against some communities, according to the forums.

Residents in Rongai, on the other hand, have abandoned their lands due to ongoing land conflicts in the region. Cattle herders from neighboring Baringo County are illegally herding their cattle in farms, causing crop destruction and violent clashes with locals. Food insecurity makes them more vulnerable to election violence. 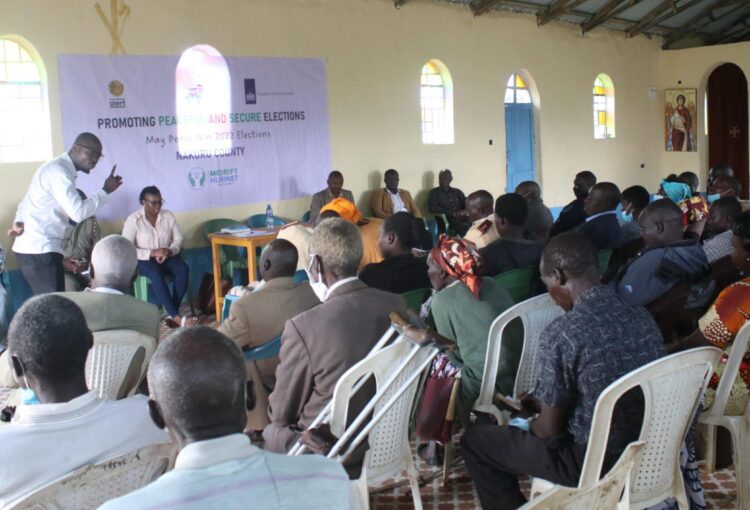 To eradicate the vulnerabilities presented to communities through these issues, the forum’s peace stakeholders devised locally-owned solutions:

To strengthen the said sub-counties’ early warning and response systems, the public has been asked to take the lead in enhancing peace and security in their communities by reporting cases to police authorities early enough to allow the latter to respond quickly to the cases. Midrift Hurinet, in collaboration with International Alert, has pledged to advocate for a vehicle and additional police officers at the Banita Police post to enhance response.

Local security agencies and actors, such as Midrift Hurinet, are collaborating with the government and other stakeholders to improve peace and security in Nakuru County through the Multisectoral and Coordination Forum for Election Preparedness, which is chaired by County Commissioner Mr. Erastus Mbui and co-chaired by Midrift-Hurinet Executive Director Mr. Joseph Omondi.

Report any suspicious activity in your immediate vicinity (anonymously) using the Muilka Uhalifu SMS platforms 988 and Online through the Mulika Uhalifu website.