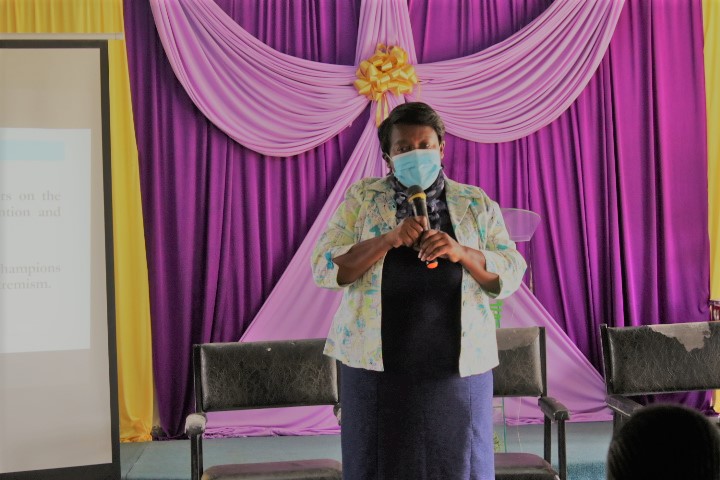 Rebecca Muturi, DCC Gilgil addressing security stakeholders during the sub-county engagement forum. The Sub County Engagement Forums are aimed at creating awareness among security actors and community leaders on the Nakuru County Action Plan (CAP) and create a pool of community champions in preventing and countering violent extremism. Decentralizing the engagements at the Sub County level is done to localize ownership and contextualize violence prevention.

MIDRIFT HURINET  PROACT project is aimed at promoting sustainable multi-sectoral coordination and collaboration among violence prevention actors to prevent violent extremism and other forms of violence. It seeks to create basic conditions for collective action among different stakeholders. The project will actively engage different sectors to develop joint strategies to address vulnerabilities among ‘at risk’ groups and to deliver messages aimed at dissuading persons towards the path of violent extremism.

In Gilgil, Deputy County Commissioner Rebecca Muturi pointed out drug and substance abuse as a potential threat likely to enhance youth vulnerabilities to extremism. She noted that “We are working very hard through a multi-agency approach to eradicate this problem of drugs in some area. We will expose the suppliers of the drugs who are known and necessary action will be taken against them”. The DCC told MidRift’s Communication team that the problem of drugs and substance abuse has penetrated to schools and young children have also fallen prey to the vice. She urged all stakeholders to work together in doing away with drugs and substance abuse lest extremists will have their way and radicalize and recruit our youth.

In Nakuru North, the stakeholders admitted that indeed there is radicalization into Violent Extremism that is happening in the area, pointing out incidences, where young people have disappeared without trace and suspicions, are that they have been radicalized. “Radicalization to Violent Extremism can permeate all sectors and there is a need for collective action by all stakeholders to effectively prevent and counter it,” said the DCC Nakuru North, Geoffrey Mayami. The DCC further observed that violence has also penetrated the schools adding that violence in schools can also be classified as extremism through not driven by an ideology.

The Deputy OCPD Mr Mwangi warned residents not to take anything for granted. He urged the chiefs to work closely with children offices on issues of children engaging in crime. He also advised that anybody with sensitive information should share with senior officers like the OCPD and should feel free to visit his office.

There was concern among stakeholders that youths who have in the past disappeared without trace might have joined violent extremists groups in Kenya or Somalia.

Nakuru County has been on spot with criminal activity among children and young people on the rise, especially in low-income estates. The County is faced with a notorious criminal gang dubbed ‘Confirm’ a gang made up of young people that specialize in cellphone-based crime and phone- and bag- snatching. The gang has been recruiting children as young as 10 years.