WHEN PEACE AND SECURITY BECOMES A MAJOR CONCERN

WHEN PEACE AND SECURITY BECOMES A MAJOR CONCERN 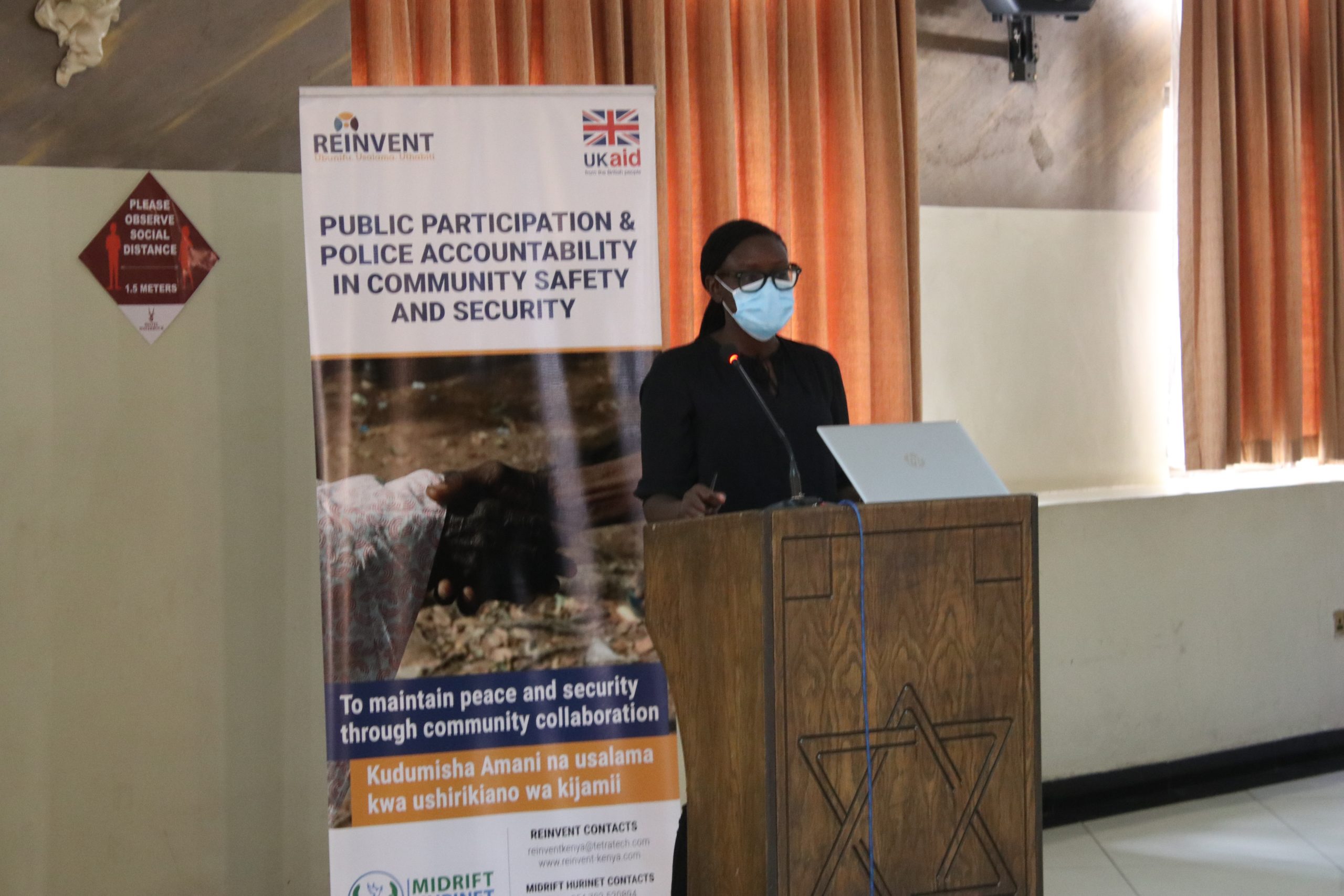 With the electioneering period around the corner, there is need to ensure that peace prevails. The aftermath of what happened during the 2007 general election, left a very bad taste in the mouth for so many Kenyans. The whole country was in shambles. Some areas were however more affected than others. One such part of the Country is Nakuru County. It was the hardest hit by the election aftermath with violence spiraling out of control. So many people lost their lives while others became internally displaced. Property was also destroyed. To add salt into injury, many women and girls were raped since criminal acts were exacerbated by the whole situation. The dire situation drew the attention of the world which even saw the intervention of International Organizations such as the United Nations. It was such a devastating and traumatic time for Kenya. The whole experience indeed left a permanent mark in the lives of Kenyans. Currently, the political atmosphere is quite tensed owing to the various alterations being made by our political leaders. Consequently, in a bid to ensure that the country does not fall into the dark pitfall that it once fell into in 2007, there are deliberate efforts by various stakeholders to ensure that peace and security prevails above everything else.

One such stakeholder is Midrift Hurinet. MIDRIFT HURINET is a non-profit organization established in 2008 in the wake of the 2007 post -election violence.  Its core mission is to empower citizens, the state and non-state actors to inculcate a culture of human rights. It does this through its various programmes such as PROACT which is a peace and security program which aims at preventing and countering violent extremism in Nakuru County; Rehabilitation Programme(REHAB) which aims at strengthening access to community based mental health and psychosocial support services (MHPSS) to survivors of torture and organized violence(TOV) as well as gender- based violence ( GBV) in the sub counties of Nakuru and Naivasha in Kenya; RE-INVENT programme which aims at reducing insecurity and violent extremism in the Northern and Coastal regions of Kenya; The Intersectoral Urban Violence Prevention Programme (IUVP)  which aims at reducing urban violence through a multi- stakeholders approach: the Resilience, Peace and Stability Programme (RPSP) which is a peace and security program and aims at reducing violent extremism, political and natural resource- based conflicts in Kenya..

Midrift Hurinet in 2021, through the RE-INVENT programme, launched a project aimed at reducing election related conflicts and violence in Nakuru County. The project targeted seven (7) sub- counties namely Naivasha, Nakuru Town West, Nakuru Town East, Njoro, Molo, Kuresoi South as well as Kuresoi North. These areas were the main target because they are a hotbed of conflicts and as such very vulnerable to incitement.

The main objective of the project was to ensure that election related conflict and violence is reduced through developing harmonized and locally owned early warning and early response systems among the National Government Administrative Officers (NGAOs), the Community as well as the Civil Society Organizations (CSOs).  The project also aims at strengthening multi stakeholder peace and security engagement through the County Security Intelligence Committee (CSIC). As such, Midrift engaged various stakeholders such as the County Security Intelligence Committee (CSIC) led by the County Commissioner, Sub- County Security Intelligence Committee (SCSIC), peace actors as well as the community itself. A total of thirty-one (31) meetings were held two (2) of them being follow up meetings.

It was expected that by the end of the project implementation period, the community as well as various stakeholders would have gained more knowledge on how to detect and prevent violence at the early stages before it escalates. Similarly, it was expected that security agencies would be more proactive and accountable during the election period. A bolder and more empowered public who hold political leaders accountable was also an expectation at the end of the implementation of the project.

During those meetings, Midrift was able to first and foremost understand and identify some of the key drivers that affect peace and security in Nakuru. This was through the various inputs such as those echoed by the County Commissioner, Mr. Erastus Mbui. He opined that negative ethnicity perpetuated mostly by political leaders, resource-based conflicts and organized gangs were some of the major propellers of insecurity and violence. Social media platforms were also identified as some of the tools used to propel violence.  The meetings also bred various commitments which were made by the County Commissioner in ensuring that they work hand in hand with Midrift to ensure that peace, security and stability prevails. The meeting held in the various targeted sub counties helped analyze and identify conflict and violence in those sub-counties, which in turn helped develop harmonized and locally owned early detection and early response system through the National Government Officers, Community as well as the Civil Society Organizations. Some of the factors which were identified that really caused violence included land and political incitements. Lack of early response by the security agencies as well as the lack of political good will were identified as some of the challenges faced with proposed mitigations being sensitizing local political leaders on importance of peace and community policing in preventing conflict and crime as well as strengthening of early warning and early response mechanisms through information gathered by local peace and security structures.

The public were engaged during the Vikao Vya Usalama Mashinani which were done in all the seven sub counties and the two follow up meetings done in Naivasha. Feedback from the public was very instrumental in that some early signs of violence were identified such as threats from one community to another, high number of gangs as well as the flouting of various government regulations such as curfews and illegal fishing threats.

Overall, the project was such a success seeing that the objectives were met. Both the Peace actors and the members of the community met through Vikao Vya Usalama Mashinani gave their commitment to supporting peace programs and becoming peace ambassadors. They promised to embrace peaceful coexistence among the various communities in their respective sub counties and pass peace messages.

From the forgoing, we can with authority say that the deliberate efforts being undertaken by Midrift Hurinet are bearing fruits in helping bring peace and security and through REINVENT programme, reduce election related conflicts and violence. Midrift Hurinet is paving the way for peace and security to prevail in Nakuru County.  Kudos to the Team!!! 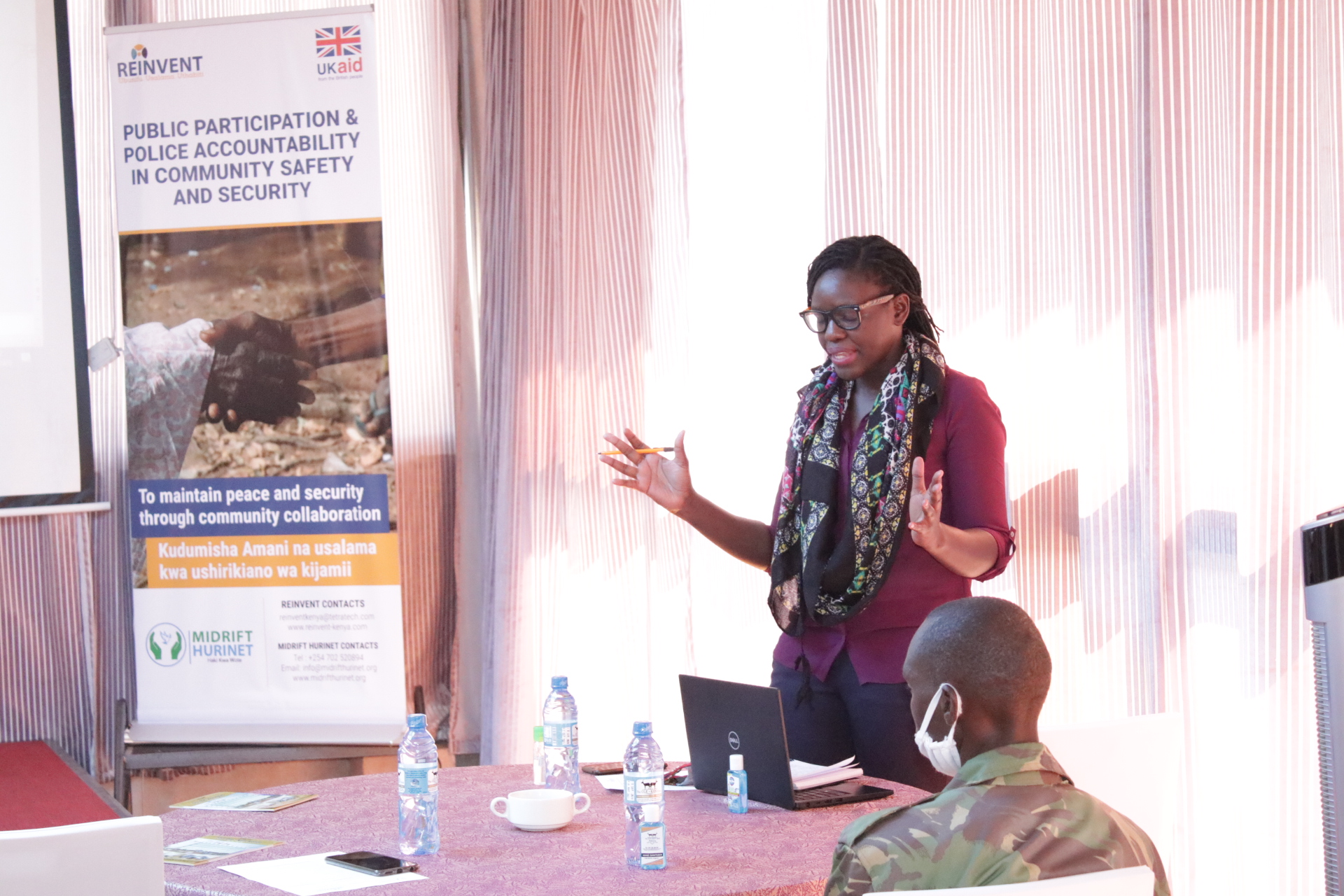 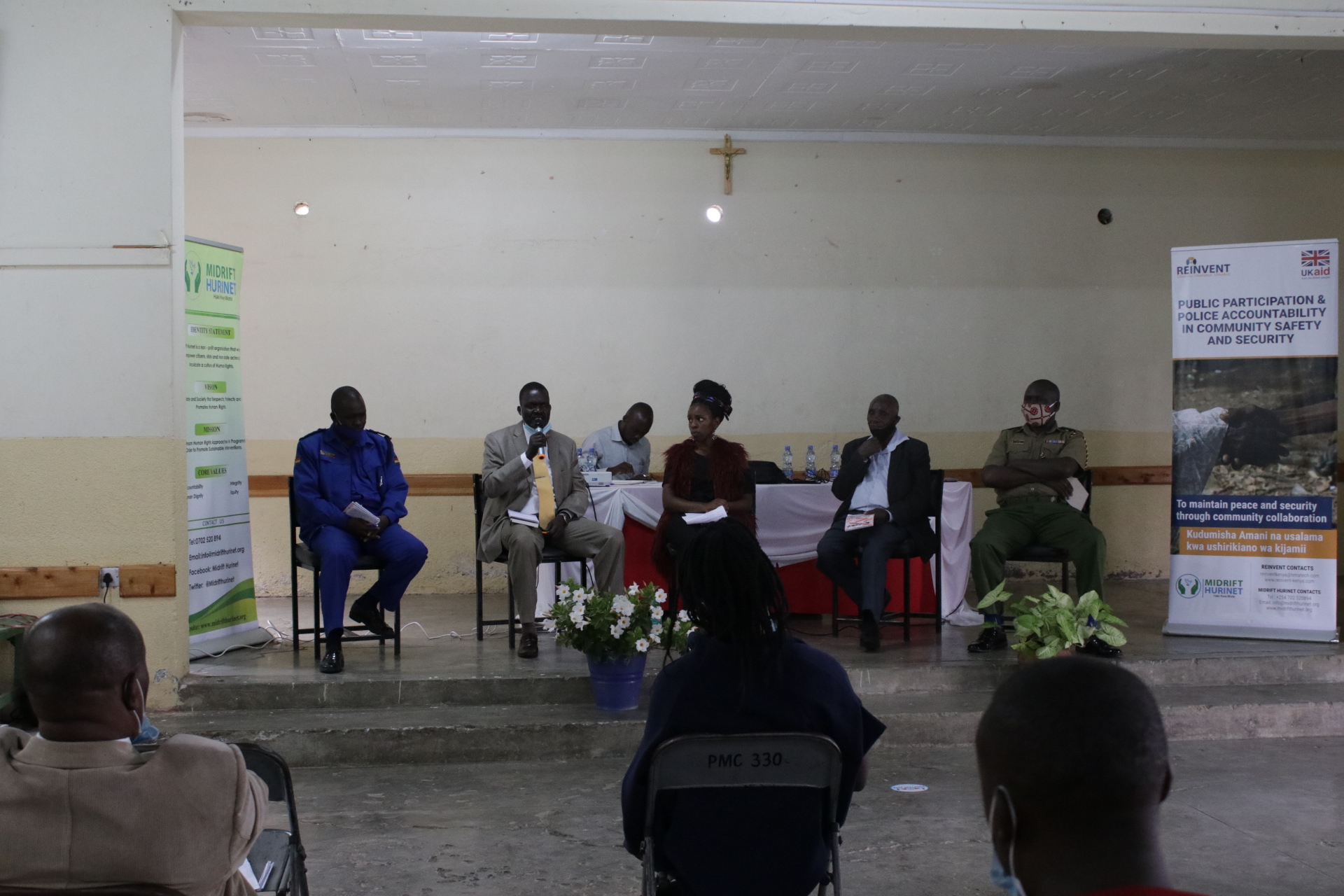 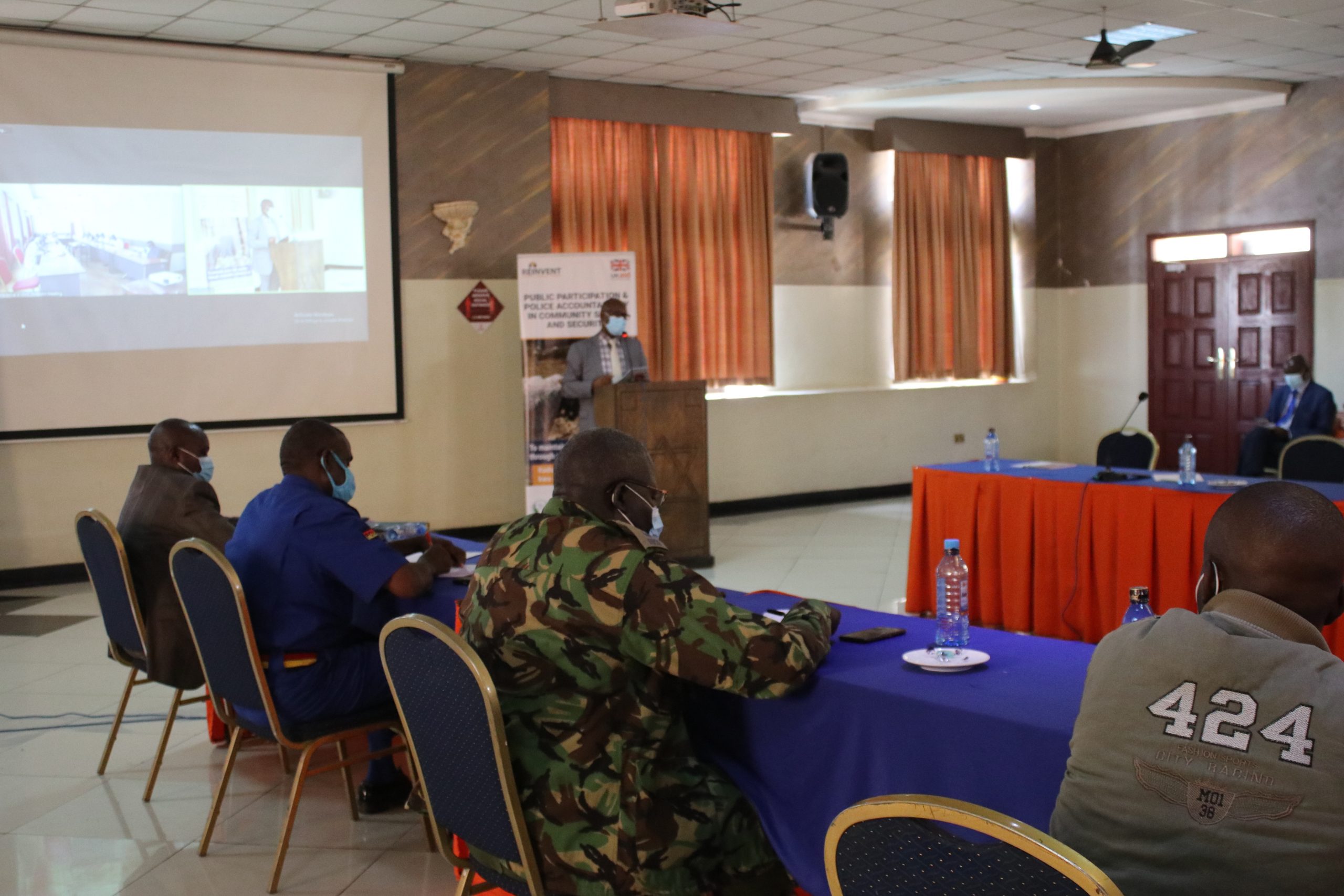