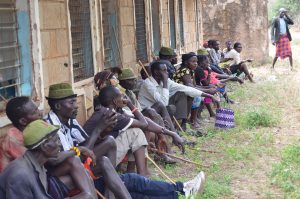 For many years, residents of Mukutani in East Pokot, Baringo County have borne the brunt of inter-communal violence between the Pokots, Tugens and Ilchamus. This violence has bred criminal violence where innocent people have lost lives. A case in point is one that took place mid-March 2017 where 11 people – seven women and four children – were killed by armed bandits.

The killings made many residents flee the area in fear for their lives and have pitched camp at Eldume while other internally displaced persons have camped at Marigat. Mukutani now remains a ghost area.

In one of its programme of sensitizing the community on close collaboration with security agencies to address inter-communal and criminal violence, Midrift Human Rights Network in partnership with Jamii Thabiti held a community policing sensitization forum at Mukutani in an effort to bring peace and harmony in the area.

The Jamii Thabiti programme seeks for more collaborative approaches from both the traditional and county level authorities in dealing with conflicts.

“No life is worth to lose in the name of earthly materials. We must live as brothers and sisters just as God created us. When you shed blood of an innocent person be assured that you will pay dearly. Our God is a God of Justice,”

The forum was held at Mukutani Health Dispensary and brought together the warring communities of Pokots, Tugen and Ilchamus. The violence also affects Turkanas and Endorois who live in Arabal, a trading centre that neighbours Mukutani. Also in attendance was a high-level delegation of government officers led by Assistant County Commissioner Francis Ng’ang’a and senior police officers.

Mr Ng’ang’a urged residents to return to their homes saying the government is committed to boosting security by adding more security police reservists officers and address the violence once and for all.

“As a government, we are grateful for the bold initiatives of Midrift and Jamii Thabiti to ensure calm returns in this area and we will not allow few individuals to erode the gains made in bringing peace and harmony in the area by spreading propaganda war. We are coming for you,” said the ACC.

Also, Mr. Ng’ang’a urged the residents to share information with the police in order to root out criminals among them.

Community elders from the warring communities said they want peace and agreed to be peace ambassadors and be at the forefront in promoting peace and harmony among the communities.

“We feel the pinch of this criminal violence. We ask Midrift Hurinet and Jamii Thabiti to hold more peace and sensitization meetings in this area in order to improve relations between the communities and the security agencies,” said Philip Adoket, a youth representative from Mukutani.

“We must decide what we want and because peace is in everybody’s interest, then we must recognize that willingness to work together is paramount to achieve this goal.”

The meeting resolved that the IDPs at Eldume and Marigat camps should return to their farms as the national government was ready to rebuild their houses. A committee comprising elders from the warring communities was formed under the leadership of the chiefs from Pokot and Ilchamus to spearhead the exercise.

Security officers and members of the community hold hands during a peace meeting at Eldume in East Pokot, Baringo County as a sign of working together to end inter-communal violence in the area. 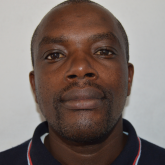